Public reception with the artist

TRANSFER’s Director, Kelani Nichole, is hosting a private bus tour on Sunday, March 8th from 1-5PM picking up at the Armory Show, and visiting the PULSE, Moving Image and the gallery in Brooklyn before returning to Manhattan. Tweet @transfergallery or email the director@transfergallery.com

TRANSFER is pleased to present in our fourth Moving Image Art Fair, exhibiting an installation straight from Jamie Zigelbaum’s solo show ‘NO THERE THERE’ an exhibition of new work that explores the materiality of the digital image.

Zigelbaum’s new web-based installation piece ’100 Hours Per Minute’ invites fair patrons to search YouTube’s video library (which is estimated to grow 100 hours per minute) via tweets to @100_HPM using a unique hashtag generated inside the gallery. Each tweet programmatically creates an abstract ‘average’ of returned videos – the resulting moving image is queued and played on his large-format display in the fair and simultaneously uploaded back to YouTube for the world to view. 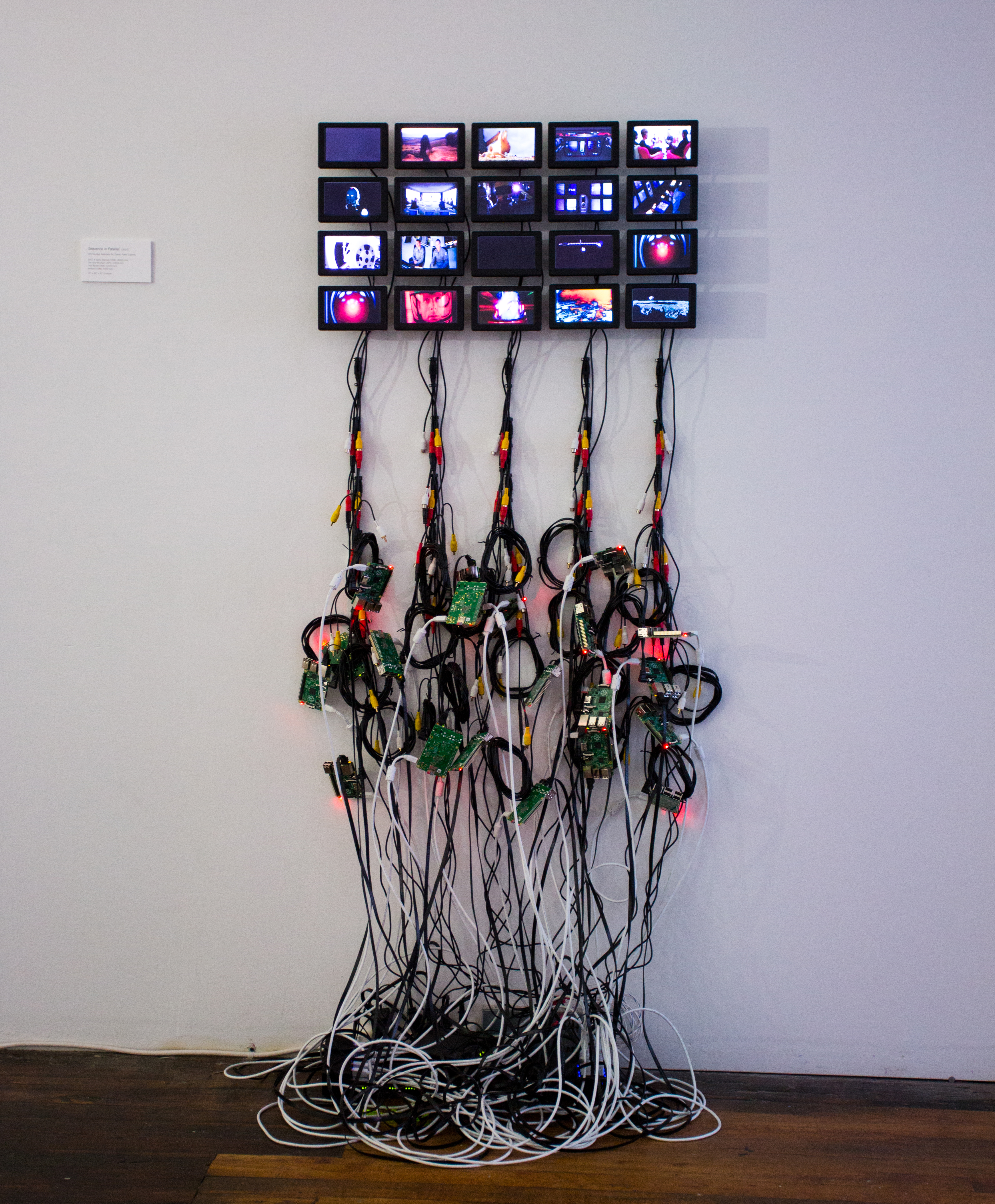 In Zigelbaum’s ‘Sequence in Parallel‘ twenty small LCD screens flicker in a grid, running on a network of Raspberry Pi’s dangling, exposed below. The grid display of ‘Sequence in Parallel’ screens a selection of Zigelbaum’s favorite films, spliced into 1/20th segments. All twenty loops play simultaneously across the screens, allowing a viewer to glimpse the entire film object as a whole.

In ‘Doorway to the Soul‘ the third new sculptural work presented at the fair, Zigelbaum has produced a contemporary update to the portrait bust. ‘Doorway to the Soul’ is compiled in real time from the webcams of Mechanical-turkers across the country. Unknown faces stream into the piece, eerily lit by the blue-glow of the screen, confronting viewers eye-to-eye as they enter the space. Viewers are invited to anonymously insert themselves into ‘Doorway to the Soul’ by completing this human intelligence task: http://bit.ly/1tXbMxj

‘NO THERE THERE’ is an exhibition of new work that explores the materiality of the digital image. This exhibition begins with two of the artist’s earlier works ‘Pixel’ and ‘Six-Forty by Four-Eighty’ but moves beyond Zigelbaum’s interest in the “recontextualization of the pixel” to question the role of the screen itself — moving images are programmatically constructed and displayed in unconventional formats, hardware is sliced and exposed, and interactive artworks engage the viewer in reconsidering the false dichotomy of the natural and the digital.

MORE ABOUT ‘NO THERE THERE’