TRANSFER is pleased to present a closing reception screening event inside Lorna Mill’s ‘The Great Code’ to coincide with the gallery’s 5-Year Anniversary. Eight Artist-curated series, including moving images from nearly 100 artists, will be installed inside of the exhibition for one night only!

By appointment anytime with the director@transfergallery.com 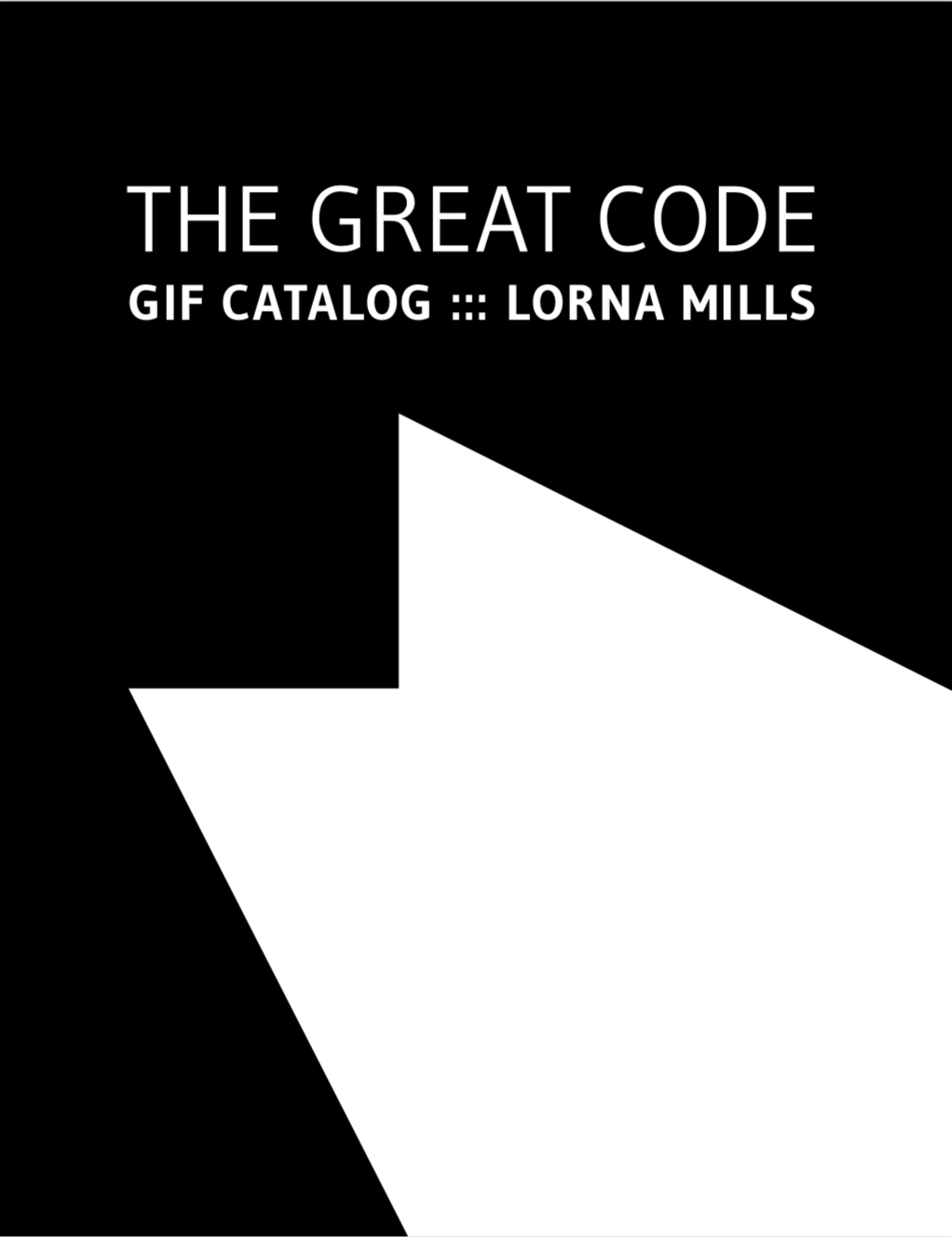 A GIF catalog featuring ‘She Full of Books and Worrying’ an essay by Seth Barry Watters accompanies the exhibition.

We acknowledge the support of the Canada Council for the Arts, which last year invested $153 million to bring the arts to Canadians throughout the country.

TRANSFER is pleased to present the gallery’s third solo exhibition with Lorna Mills. ‘The Great Code’ is an exhibition of animated gifs and prints suggesting the order of knowledge has been collapsed and compressed. The culminating work has evolved in Mills’ studio over the past 15 years.

‘The Great Code’ is a suitable analogy for the way we now consume information — in a heterodox and nonlinear manner. Or it could be a new model for the Western tradition of thought: the fragmented datastream, an incoherent pile of thoughts, arguments and stories, … a firehose of information from perverts, hustlers, thieves, liars, fascists, communists, bad mothers, colonialists, drug addicts, middle aged ladies from small towns, misogynists (lots of them), homophobes, racists, supply side economists, plagiarists, political hacks, jesuits, pederasts, bank tellers, serial liars, brigands, and blaggards.

The exhibition opens with a reception with the artist on Saturday, January 27th from 6-10PM. A catalog will be released from the exhibition, which includes an essay, “She Full of Books and Worrying” commissioned from Seth Watter.

A closing reception screening event will be held on Saturday, March 24th 2018, coinciding with TRANSFER’s 5-Year Anniversary. In 2013, Lorna Mills curated ‘Clusterfuck Zoo’, instigating a series of closing events curated by artists in response to their solo shows – all eight of the spontaneous series will be screened at the same time: Clusterfuck Zoo from Lorna Mills, Anatomize from Rollin Leonard, Net.\/\/orth from Daniel Temkin, Refraction from Giselle Zatonyl, GIFs to Have Sex By from Faith Holland, Le Petit Mort du Blingee from Lorna Mills, NarGIFsus from Carla Gannis, and Rule 35 from Faith Holland.

A full inventory of work from ’The Great Code’ is available from the gallery. Please inquire with the director@transfergallery.com to request information.

Recent exhibitions include “Abrupt Diplomat” at the Marshal McLuhan Salon at the Canadian Embassy in Berlin, for Transmediale, “At Play in the Fields of the Lord” at Transfer Gallery, Brooklyn NY, “DKRM” at DAM Gallery, Berlin and “Dreamlands: Immersive Art and Cinema 1905 – 2016″ at the Whitney Museum in NYC. For the month of March, 2016, her work “Mountain Time/Light” was displayed on 45 Jumbo monitors in Times Square, NYC, every night as part of the Midnight Moment program curated by Times Square Arts.

She has also co-curated monthly group GIF projections, with Rea McNamara, for the “Sheroes” performance series in Toronto, a group GIF projection event “When Analog Was Periodical” in Berlin with Anthony Antonellis, and a four person GIF installation, “:::Zip The Bright:::” at Trinity Square Video in Toronto, with Sara Ludy, Nicolas Sassoon and Rick Silva. Lorna Mills’ most recent curation project, “Ways of Something” is a collaborative remake of the 1972 John Berger documentary “Ways of Seeing” episodes one through four, featuring over 115 networked artists.

GALLERY HOURS
Saturdays: 12–6PM or schedule a private viewing or inquire for more details with director@transfergallery.com