She Who Sees the Unknown 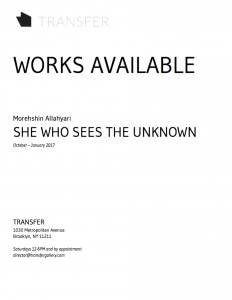 ‘3D-Printing an Army of Forgotten Goddesses to Fight Colonialism’, Claire Voon for Hyperallergic

‘Carolee Schneemann, Jackie Brookner and Morehshin Allahyari Channel the Feminence of the World’, Roger Denson for the Huffington Post

The artist’s source material will be made available to gallery patrons during the run of the exhibition. This collection of images, books and essays will grow over the run of the solo project, and portions will be made publicly available. In addition, visitors are encouraged to schedule time with these materials by writing to the director@trasfergallery.com.

‘She Who Sees the Unknown’ is Allahyari’s first iteration of a new research project to be developed in residency at Eyebeam – a nonprofit studio for collaborative experiments with technology toward a more imaginative and just world. By providing generous support to artists for research, production and education, Eyebeam makes ideas real. https://eyebeam.org

TRANSFER is pleased to present ‘She Who Sees The Unknown’ a new solo exhibition from Morehshin Allahyari.

She who saw all things in the broad-boned earth and beyond
and knew what was to be known
In her city, there was no ‘outside’, yet doors remained open and unlocked

SHE WHO SEES THE UNKNOWN is a new body of work from Morehshin Allahyari on Digital Colonialism and ‘re-Figuring’ as a Feminism and activism practice using 3D scanners and 3D printers as her tools of investigation. Researching dark goddesses, monstrous, and djinn female figures of Middle-Eastern origin, Allahyari devises a narrative through practices of magic and poetic-speculative storytelling, re-appropriation of traditional mythologies, collaging, meshing, scanning, and archiving. The exhibition launches concurrently with the start of the artist’s one year research residency at Eyebeam where Allahyari will continue her investigation through public events, creating figures, speculative archival and writing methods and ceremonial 3D printing/scanning exercises.

In order to move beyond a simple binary view of West vs Islam / tech-future vs religious-history, Allahyari looks to forgotten, misrepresented, and suppressed histories and narratives. If the Jihadists express their power by performatively destroying the past and flattening the earth and the power of tech-utopian westerners over heritage is expressed through digital technologies that allow them to reclaim and colonize objects before and after they are destroyed, Allahyari’s project offers a third method to re-situate power and remark history and ownership.

“My work undermines the uneven economics of Western technocolonialism and the performative rhetoric of Islamic fundamentalism, through a ficto-feminist-figural expression of power. I seek to makes visible the invisible power relationships emerging from the age of ‘The War On Terror’, current fashionable acts of cultural reconstruction, and the ownership/economics of 3D scanned data through a research-based practice and public engagement.

‘She Who Sees the Unknown’ includes new 3D sculptures, text, moving image and a public research program that takes the shape of a reading room and online public archive.

A full inventory of work from ’She Who Sees the Unknown’ is available from the gallery. Please inquire with the director@transfergallery.com to request information.

Morehshin Allahyari is a new media artist, activist, educator, and occasional curator. She was born and raised in Iran and moved to the United States in 2007. Her work extensively deals with the political, social, and cultural contradictions we face every day. She thinks about technology as a philosophical toolset to reflect on objects; a poetic mean to document the personal and collective lives we live and our struggles as humans in the 21st century.